I, Human: Transhumanism and Gender - By Jarys 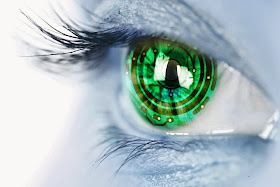 Transhumanism, the belief that humanity will evolve or adapt rapidly beyond our current understanding through applied sciences and technology, is a hallmark of futurism. The "singularity" is coming, we read; an event in which this change and adaption will accelerate beyond control. At or before that point, Transhumanism will become reality. This can appear in a number of ways, and we look to science fiction for clues. Robots and programs might reach human intelligence or surpass it (I, Robot, The Terminator, Her). Humans might affix machines to themselves and merge with information technology (The Matrix, Ghost in the Shell, pretty much all of Cyberpunk), Humans might bioengineer themselves to transcend our environment or concepts of individuality or gender (Bioshock, numerous superheroes).  Just look at our literature and media, you will find copious examples teeming with hoped for or feared possibilities for our future.


Even Mary Shelley's Frankenstein, arguably the first example of Science Fiction in modern literature, holds the proto-seeds for transhumanism. A new kind of person is created, adult yet wholly new-born, when a scientist attempts to master resurrection. This new being struggles with acceptance as an alien "other' from a fearful and hateful humanity. Some have theorized that the alien ugliness in the Monster's looks are the first fictional example of "The Uncanny Valley"; the region of close similarity a subject can have with humanity while being so different that the juxtaposition is disturbing. The creature is rejected continuously, both by society and by his maker, and is driven to vengeful rage. This may have been the first story of human progress unleashing a horrifyingly uncontrollable and dangerous creation, but Shelley was genius in presenting this story in part from the creation's perspective. Ever since, science fiction has wrestled with and pondered not only progress, but also how that progress shapes identity. From these questions, Transhumanism took form and rose up from its slab.

But, what if I told you that you didn't have to wait any longer for science to get involved in editing the human form, and with it human identity? Sure, you can install a camera in your eye or a magnet in your hand tomorrow, if you are rich or willing to experiment on yourself. But I'm talking about a procedure that's been done for decades, a procedure practiced tentatively throughout the 20th century and has roots in Victorian era medicine? A procedure meant to apply science to a social matter, just like any other "'what hath science wrought?" Sci-fi novel premise?


Gender is so incredibly linked to our identity. Children from an early age know what gender they are, denial of one's gender can be traumatizing, people mistaken for a gender not their own are assumed to be offended. If you've ever had the misfortune of mistaking a person's gender while working in food service or retail, then you have probably seen what affronted rage looks like....or soul-crushing disappointment. People care about their gender, it's theirs. So what to do when society cares about a person's gender too? Enough to define it beyond it's current behavioral and biological-sex-based appearance? Here science was offered as the means, specifically medical science.

The first sex reassignment (through genital surgery) was performed in the 1930's. This was performed on a willing adult participant as a means to express their gender identity. These cases are now (often) called transexual and such surgeries are often performed at the behest of adult transexuals, However, the surgery was later brought to infants who were found to be intersexed, in the 1960's. Infants who were unable to consent. If there ever was a real-life situation in which the use of scientific advancement led to questions about human nature, just like in your favorite novel, medical science's response to intersexuality is it.

Intersexuality describes the situation in which an infant's sex cannot be medically determined. There are four physical features that help determine sex; the genitals, the gonads, the hormones, and the genetic code. These can't always be described as either male-or-female, and if any of these features disagree or are in anyway unclear, the child is agreed to be intersexed. Historically, medical experts (both doctors and researchers) have leaned toward interpreting intersexuality as an aberration, mistake, or disease and have consequently moved to surgically alter the infant through sex assignment surgery, so that they appear either male or female. Even today, the clinical term for such conditions is "Disorders of Sex Development", which some intersexuals and medical professionals criticize as insulting.

It's probably best that I step in at this point in the article to name my bias in this article. I, Jarys Maragopoulos, am an intersexual. Though many perceive me as male, this is due to the gender assignment surgeries I was given as an infant and child. I cannot possibly talk about these things objectively and I won't attempt to. This article is born out of my interest in my condition and my passion for transhumanism, which I see as intrinsically linked. Let me tell you why.

Transhumanism has always been about the merging of humanity with "the other". Humans merging with their tools in cybernetics, their tools evolving to become indistinguishable from humans through artificial intelligence, or humans using their tools to become the other through bioengineering. Integral to these themes is a challenge to the boundaries between what is human and what is not, what is acceptable as "normal" and what is outlandish, novel, or just plain mutated. Conflicts in these stories often come when people feel threatened by how close technology brings us to that "other".


Well, when human is defined as either male or female in sex, man or woman in gender, to be outside that is to be seen as and treated as "other". Of course past scientists and doctors looked upon the intersexual baby and thought it other. If male or female is all a human can be, is a baby that is neither male nor female sufficently human? So they did what they could to correct the affront, they tried making the baby "normal." They took what was questionably human, and made it more clearly human. No more pesky questions on human sex and gender! This was always done for the good of the child, assuming that no one wants to grow up abnormal. What if the baby couldn't one day have sex? What if they were rejected by others? But in attempting to save these children from rejection, they rejected the children as they were. Clinical psychological studies of intersexuals show that sense of rejection, even from events originating before conscious memory. Many intersexuals report feelings of shame attached to their identity. I know I do, and I used to feel it a lot more acutely.

Technology was used upon me, without my consent, to adapt my identity to the social norm, by bioengineering my body until it fit that norm. I'm not mad, not any more. I'm FASCINATED. In the books I love, writers guess at future transhumanism at how our concept of human might evolve, when I myself have always been evidence that what is human far exceeds our concept of what is human .My body has long been an example of science's capacity to bridge the human with the other, to sculpt the human form to our whim. I look the way I do not because of chaotic genetics, but because my parents, grandparents, and doctors had a meeting to decide what I would look like. I am proof that science is powerful in its mastery of the human form.

But I am also proof that science can be oppressive and uncaring...or, at least wielded for oppressive and uncaring purposes. Normal was measured, mathematically if not compassionately, and I was found lacking. I was changed, parts added and subtracted from my body as if I were a modular piece of equipment. It's dehumanizing. I grew up believing I was born sub-human, because I had to get extra work done before I could be like everyone else. I didn't even know I was an intersexual until my twenties, when I questioned the details of my birth more thoroughly. Though I'm not angry any longer, I won't deny that believe I was judged wrongly. There is nothing "abnormal" about me, just statistically unlikely. There is nothing sub- or un-human about being neither male nor female, nor in straddling the line between male and female. I, other intersexuals, and transgender people are all a variety of human, expressing our identities just as anyone else. I believe that further social progress within scientific development and in medicine has and will continue to produce more compassionate care for infants born as I was.


When I was eleven, I received a copy of Frankenstein as a gift and I ate it up. Now I refer to it as my favorite book of all time. I identified with the creature's frighteningly clinical birth, "sewn up" body parts, feelings of societal rejection, and sense of alienation from humanity. I felt this in ways I couldn't explain because I had no frame of reference for the surgeries I barely remembered and no context for the gender cues I kept missing. Up until that point, I thought that I was the only person like me or felt as I did (I was discouraged from talking about my medical past both by my parents and the one time I tried telling a friend at school) and Frankenstein was proof that someone at least understood. This genius woman of the Romantic era some how made me feel "seen". This is why, though I know that movie had a dreadful script and was in no way quality, I love the movie "I, Frankenstein" . When one character in the film refers to the Frankenstein Monster as "It" and another character corrects this pronoun immediately as "No, him", I started crying, because even this B-list action movie gets it, gets what that book was about. You can ask my co-host and editor, Mike. He saw it with me, he'll confirm that I teared up, and he understands. A good friend understands the human need to be understood and respected...and treated as human.

Even when our concept of what is human is changing.

Whether I am transhuman because my biology transgresses society's limits on what is human or because what medical technology has done to my body proves that we already live in a world of transhuman science, I feel this theme quite deeply. Not all intersexuals share my history or feelings on the matter, it bears stating. I believe that being genderqueer, as I am, is not common amongst intersexuals. Genderqueer refers to a gender Identity that is not strictly male or female. By contrast, I believe most intesexuals have a male or female identity. The genderqueer experience also does not define the transgender experience, trans* being a term that includes transexuals, the genderqueer, and all manner of people who are in the minority in their gender experience.

Jarys Maragopoulos is a teacher who lives in Alameda with their partner and two cats. Jarys is a Co-host of the Ace of Geeks Podcast and can be reached at Jarysm@gmail.com - Please feel free to send any questions about intersexuality to the above address or ask below. I hope you had a meaningful and peaceful Transgender Day of Remembrance. The Transgender Day of Remembrance was this Thursday the Twentieth, the day this article was finished. With that in mind, this article is dedicated to Lucy Meadows.